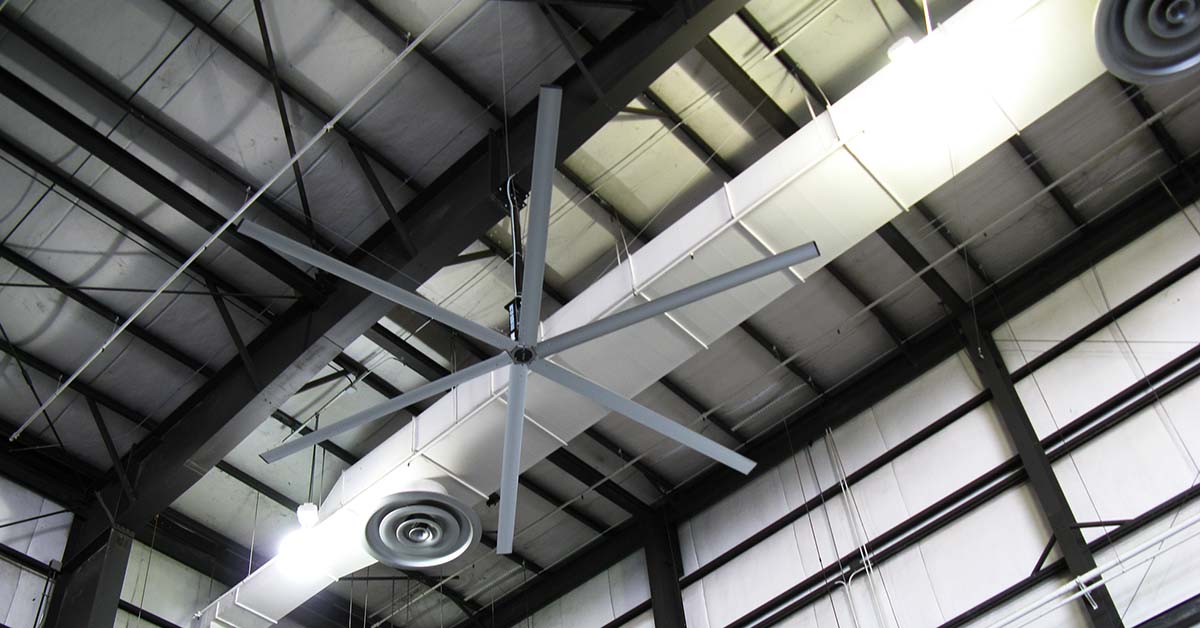 An HVLS, or “high volume, low speed” fan is a massive ceiling fan that revolves at low speeds and moves warm or cool air throughout a room. They are typically added in areas with higher ceilings, such as manufacturing plants, warehouses, and other industrial operations.

In summer months and warmer climates, this type of fan can assist with the removal of excess moisture from the air by substituting hot, humid air with drier air. During the winter, they can also help manage temperature by fully distributing warm air through a building.

HVLS fans are a minimum of 7 feet across. Some fans can be as much as 24 feet across, although for almost all commercial configurations several smaller fans are used. Fan motor power varies, but most are between five eighths and one horsepower.

Although most HVLS fans are designed for ceilings, there are some that can be configured to be affixed to floor mounted poles.

The efficiency of an HVLS fan is due to its slow velocity and large size. HVLS fans create huge segments of air that travel slowly, as opposed to the rapidly moving, small scale air flows that are produced by ordinary ceiling fans. Turbulent, rapid air current from typical fans creates friction against stationary air and speed quickly dwindles.

With large-scale fans, the bigger air columns move more gradually and go much further because there is not nearly as much air friction. Accordingly, it requires less energy to push larger volumes of air slowly than it takes to drive smaller amounts of air at a more rapid rate.

The difference in energy consumption is startling. It takes nearly 27 times more energy to move air at 6 miles per hour versus moving air at 2 miles per hour. The bottom line is this: you're much better off running larger fans a very low speeds versus smaller fans at high speeds.

In large structures, especially those with high ceilings, air naturally stratifies. Hot air moves toward the ceiling and the cooler air stays near the ground. HVAC systems must work furiously to warm the area close to the floor, which costs money, while most of that warm air rises toward the ceiling, away from employees.

Using an HVLS fan pulls a large volume of heated air away from the ceiling, assisting in recirculation throughout the building, thereby normalizing the interior climate and enabling the HVAC system to work more efficiently.

Although HVLS fans are perfect for maintaining heat in a building, the opposite is also achievable: they can help with air conditioning in the summertime or in warm climates.

The fans keep air circulating throughout sizable areas, and this circulation creates an evaporative cooling response. Although the fan does not physically alter the temperature of the circulating air, it will reduce moisture in the air through evaporation, creating a more pleasant environment.

While reducing energy expenses is a fantastic incentive, there is the additional benefit that reducing electricity consumption also improves a business’ carbon footprint. Over time, HVLS fans can generate substantial reductions in energy use, especially for businesses with numerous sites.

Happy employees are generally more effective, so keeping your facilities at optimal temperatures is beneficial. Numerous studies have shown a connection between uncomfortable temperatures and declines in productivity.

If you’d like to learn more about the benefits of HVLS fans for your warehouse, manufacturing plant or other industrial facility, talk to a professional at Raymond West today.